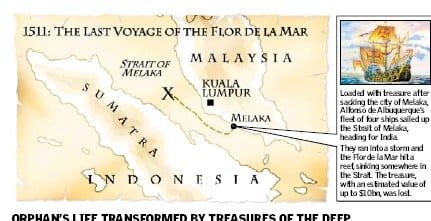 Stories about her spoils and her cargo of treasure:

Aboard these ships are the rich plunder of Malacca and young boys and girls and specially the most rich objects ever seen. The Governor intended to offer them to Dona Maria, the Queen, and to the King himself. She was carrying a four legs table on which the Queen of Malacca used to take her meals that was worth 80.000 Cruzados. Even the merchants of Malacca offered 300.000 Cruzados to get it only for its precious stones. She was also carrying four sitting lions made of gold with perfumes inside. They used to be in the chamber of the King of Malacca, their eyes, tongs, teeth and nails were made of precious stones and their estimated value was 200.000 Cruzados. According to other reports, she carried more than 80 tons of intricately worked gold objects and countless chests of precious stones and pearls. 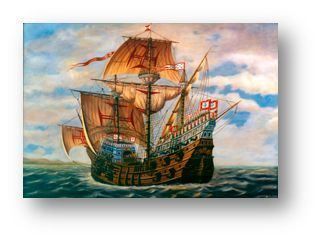 Several attempts to salvage her cargo reputedly one of the richest in the world have failed until now. Based on faulty statements, it is notorious that President Soeharto himself spent US$ 20 millions in an unsuccessful search.

Nevertheless, some treasure hunters have claimed in the press having found the wreck. The American Bob Marx announced that he found her in 1992 after 3 days of survey, 100 miles away from the original search area. But according to the story, word leaked out immediately and the project was halted.

Portugal, Malaysia and other countries whose treasures had been plundered some 500 years ago lodged claims to the wreck in the International Court at The Hague. As a matter of fact, ownership has yet to be established today.

In March 1992, the front page of Skin Diver Magazine announces “80 billion dollar treasure lost and found”, but no real and solid evidence for this fact!

Before Marx’s venture a previous attempt was done in 1989 and 1990 by a group of Australian and American treasure hunters along with the Indonesian businessman Tjetty and his company South East Asia Salvage (SEAS). Their search was based on clues that the ship was lost on a rock or reef on the coast of Sumatra, just opposite to the kingdom of Daru. Survivors had managed to reach the river Pacem and the ship’s final resting place was this rock or reef within a cannon shot from shore.

Two main survey points were established as Tamiang and Pasai with an approximate distance of 60 miles between them to make a complete survey.

In May 1989, surveys began and 3 month later, only several old anchors were found, a Chinese junk rudder and a WWII steel wreck, but no evidence of the wreck of Flor Do Mar.

In March 1990, the decision was made to abandon the area and move to Pasai were surveys begun around karang Timau with the help of an archaeologist who claimed to know the precise location of the wreck. 200 meters southwest of Tengah reef, a large magnetometer reading was registered, but dives on the spot revealed nothing of significance. Even the airlifting of the soil, making a large hole was disappointing. Surveys continued and the airlifting was abandoned. Finally, SEAS was dissolved in 1992.

From a more serious and simple analysis of the region, as well as information from archives, all the indication available are only approximate. In these early ages of discoveries by the Portuguese, accounts of any sorts are evidently inaccurate. The maps were rough and the poor shipwrecked sailors gave the account they could only afford about their misfortune.

Flor de la Mar was stranded on the beach and sunk in the muddy bottom. She was lost in a high current area and during a storm. The rough conditions of the sea most probably destroyed what was left of her. A portion of her cargo almost certainly spilled out onto the seabed too, the rest being salvaged certainly later by the locals.

Of course, nowadays the ship’s body has not survived and it is, in all probability, very difficult to locate gold dust, coins or precious stones in a zero visibility diving area, with a muddy bottom and high currents…

Flor de la Mar has been reported to be one of the richest shipwreck, if not THE one, still to be found anywhere in the world. By reading most of the stories written on her, one would convince itself that it is true. Therefore, a common sense and a true analysis of the whole data can only encourage oneself to keep this story as a beautiful dream and not as a serious investment in shipwreck salvage. 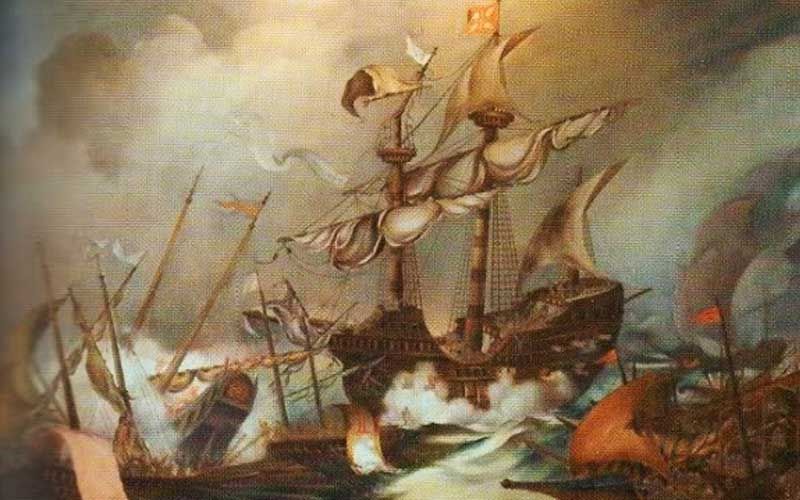 For the last 500 plus years, navigators, adventurers, and even states have been looking for the lost treasure of Flor de la Mar.

The worth of the treasure has been estimated to be around three billion dollars.

According to the research document in the museum of Malaysia, one of the components of the treasure were 4 full-sized seated lions cast from pure gold. Other statues and a throne of pure gold are also believe to be among the sunken treasure as well as countless amounts of gold, silver and gemstones.

A large number of people tried to discover the lost Treasure of the ship. Several have claimed to have found it over the years, but never with any proof. Most believe that the treasure is still lost.

Recovery of the vessel will be no easy task. Even if the wreck is found there are at least 3 different countries that lay claim to the treasure.