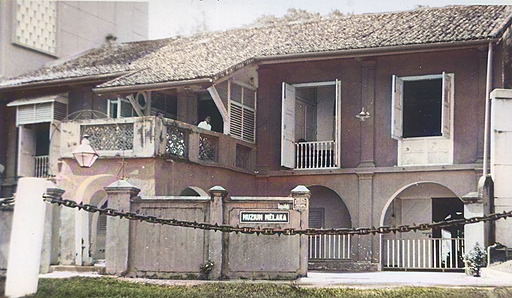 The Melaka Stamp Museum was originally a house located next to the monastery which is now the Museum of The Islamic and Malay world. This small terrace building is rarely visited by tourists. However, it contains its own history and story that many people do not know.

An article written by Sheila Prentice, tells of a Nun who had an affair with a Portuguese soldier. The difficult relationship continued until the Nun became pregnant. When their secret is revealed, the Nuns were sentenced to be buried alive in a wall outside the museum building which is said to be a secret meeting place. After almost 500 years have passed, the Nun’s spirit can still be seen hovering around the area of house no.7 in Jalan Kota. Sheila Prentice, who is also a resident there explained that she and her children had a scary experience. The presence of the spirit can be felt and the children are often awakened from sleep late at night.

Locals have also seen a woman in a church dress and a man in a soldier’s uniform loitering on the porch of house number 7 as their faces face the sea. ‘They’ look very sad. House no.7 in Jalan Kota was later converted into the Melaka State Museum in 1954. The house is also one of the oldest Dutch architecture in Melaka which is now the Melaka Stamp Museum since 2007.