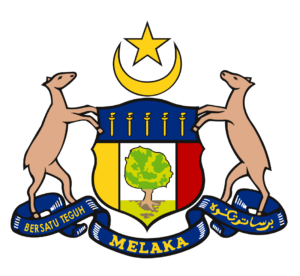 The various colours found on the Melaka emblem include white, yellow, and blue such as the colours found in the Malaysian flag which intentionally signifies that Melaka is a part of Malaysia. The crescent moon and the five-pointed star on top of the logo symbolise that Islam is the official religion of Melaka.

Apart from that, there is a Melaka Tree in the middle of the shield which shows how the state got its name. The emblem also includes two mousedeers holding shields to also represent how the state of Melaka was founded in the past.

In the story, it is told how Parameswara who is a founder of Melaka was impressed with the ability of a small-sized mousedeer when it kicked his hunting dog into a river while he was resting under a Melaka tree. He then decided to stay there and name the land Melaka.

The motto of the state of Melaka is Bersatu Teguh, which means Unity is Strength.