Panglima Awang Hitam: Was He the First Man to Circumnavigate the Globe? 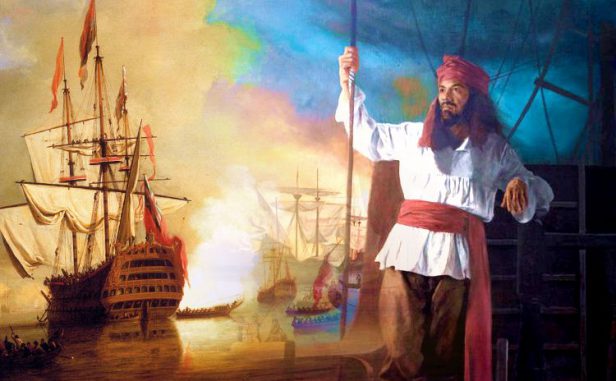 “Magellan’s slave may have been the first person to truly circumnavigate the globe.”

Napoleon once said, “What is history, but a fable agreed upon?”

Have you heard of a story of a Malay Slave who was an underdog sea explorer?

Who was really the first person to circumnavigate the world?

Panglima Awang Hitam was the pilot that steered Magellan and his ship to fame while relegating the Malay maritime expert to the backburner of history.

Such disservice by the exploitative colonialists who had unabashedly used the natives, particularly the Malays who were masters of the Nusantara region for their own ends must be corrected.

Panglima Awang’s name was conveniently blotted out of the annals so that Magellan’s exploits could be woven in all its fabricated heroics.

If there is any single Malay ever who has had the greatest impact on world history, it would probably be Panglima Awang Hitam, also known as Enrique Magellan.  It is therefore ironic that we know so little of the man. A story not known by many, even among the Malays. He is called Panglima Awang in Malay literature but there is no mention of him in any credible Malay historical records. There is brief mention of Enrique in the official Spanish crew lists, as well as Magellan’s last will and testament. Almost all of the certain facts that we know of Enrique come from the most comprehensive chronicles of Magellan’s voyage, the narrative by Antonia Pifagetta, an Italian volunteer who joined Magellan’s crew.

One of the most important members of Magellan’s voyage was his personal slave Enrique, who had been with the captain since an earlier voyage to Malacca in 1511. A native of the East Indies, Enrique reportedly spoke a Malay dialect and acted as the expedition’s interpreter during their time in the Philippines. As many historians have noted, if Enrique was originally from that part of the world, then by the time the expedition reached the Philippines he would have already circled the earth and returned to his homeland. If true, this would mean the slave Enrique—rather than any of the European mariners—was the first person to circumnavigate the globe.

Burning with the unquenchable wanderlust and seafaring passion of his race, Enrique of Melaka had sailed the seas of the East Indies with his master, followed him across the Indian ocean, and around the rim of the African continent; loyally fought alongside him in North Africa; lived in the splendour of the royal courts of Portugal and Spain. He embarked upon the greatest adventure ever to circle the globe, the final frontier, to explore strange new worlds, to seek out new life and new civilizations, to boldly go where no man has gone before.

Enrique became the sole ears and voice of Magellan’s crew. As they continued their voyage to the surrounding island kingdoms, it was Enrique alone who, on behalf of Magellan and the Spanish crown, spoke with kings and traders – requesting provisions, bartering goods to trade, offering messages of peace, delivering threats of war.

It was after delivering one such threat that Enrique lost his master and friend, Magellan. Magellan was killed by a band of rebellious natives in Cebu, led by their leader, Lapu Lapu. On Saturday, 27th of April, Magellan attacked Lapu Lapu’s village with 60 men-at-arms – cannons, muskets, crossbows and steel swords against bamboo swords and poison-tipped arrows. But the small spaniards suddenly found themselves overwhelmed by over 1,500 Lapu Lapu warriors.

Devastated by Magellan’s death, Enrique went into deep mourning. Pifagetta writes that “he no longer went ashore to do necessary business but was always wrapped up in a blanket”. He may have felt that a master whom he had loved and admired was now dead, and there was no longer any reason to remain a slave – it was now time to start a new life as a free man.

Official Spanish records list Enrique of Melaka as one of the 27 men massacred in an attack in Cebu. So we really did not know if Enrique did survive that attack, as Pifagetta claims. What we do know is that was the last we hear of Enrique in Pifagetta’s diary – and he disappears into the mists of history. No one knows if he remained in Cebu or found his way back to Melaka or maybe even returned to his homeland in Sumatra. If he had indeed made his way home, making the Malay slave the first man ever to have sailed around the world, rather than Magellan.

One could argue, how could a Malay slave have beaten the flower of Spanish manhood in the race around the globe? Certainly, Enrique was to be just an underdog to the heroic deeds of Magellan that were told in countless books about this remarkable voyage written over the next few hundred years. It was only in this century this questions were raised about this Malay interpreter and his role in this historic achievement.

Malay was by then the “lingua franca” of the whole archipelago, and the official  language of international diplomacy and trade for the whole region. All references in Pifagetta’s chronicles have him speaking with kings, chiefs or traders – rather than the common folk who may have not known the international language of Malay.

We have no evidence of what his name was at birth, but Magellan renamed him Enrique, probably because he was baptized as a Christian on St. Henry’s feast day, a few days after the siege of Malacca began. Here is what Magellan says about Enrique in his will:

“And by this my present will and testament, I declare and ordain as free and quit of every obligation of captivity, subjection, and slavery, my captured slave Enrique, mulatto, native of the city of Malacca, of the age of twenty-six years more or less, that from the day of my death thenceforward for ever the said Enrique may be free and manumitted, and quit, exempt, and relieved of every obligation of slavery and subjection, that he may act as he desires and thinks fit; and I desire that of my estate there may be given to the said Enrique the sum of ten thousand maravedis in money for his support; and this manumission I grant because he is a Christian, and that he may pray to God for my soul.”

Although Enrique was certainly a native of the Malay Archipelago, the truths about his origin are still debated by historians of both naval and Southeast Asian histories.

Ferdinand Magellan stated In his own written will and testament, that his slave, Enrique was a native of Malacca. In Antonio Pigafetta’s record of The First Voyage Around the World (1519-1522), the chronicler mentioned that Enrique came from Sumatra.

Maximilianus Transylvanus, who published his interviews with the survivors of Magellan’s expedition in De Moluccis Insulis (1523), claimed that Enrique hailed from the Moluccas.

After Magellan’s death, Enrique had been in an oblivion. Who was he before he was baptised as Enrique? What was his real name? Where was he actually from? Why was he so special that Magellan took him back to Portugal, then Azamor, and Spain, and then back again to the Malay Archipelago 10 years later? Was it just merely accidental or intentional? And where was he after Mactan’s episode? Could it be him who completed the journey hence deserved a place in history as the first man to circumnavigate the world instead of Magellan?